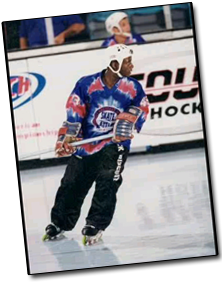 Feeling a bit nostalgic, reflecting back to the good old hockey days. Hockey was a big part of my life and and kept me focused in my early to mid twenties, I love to compete and with my ambitious desire and never give up attitude, I found that anything is possible if you have the belief and confidence. I know what is takes to win. Life can be tough and throw up all kinds of obstacles (to test you) but if you have the passion, the resilience, the desire and a goal, you will succeed. So never give up! You can learn a great deal about yourself playing a sport.

I competed at a high level for several years in the UK and Europe. As a team we won 5 league championships, 3 national championships and 2 European championships. I also had numerous caps playing for Team GB. This is a me playing in NARCH (North American Roller Hockey Championships) in Chicago ’97 I think? Here we were playing alongside some of the best players in the world. We were the first UK team to play in such a tournament, not bad for a group of enthusiastic lads from Tunbridge Wells. It was a great achievement and experience for us all.